Pork Tenderloin with Five Spices and a Simple Salad

I’m always impressed with the versatility of pork. With so many ways to cook it, I never tire of it. I like cooking Pork Tenderloin because it cooks relatively quick and is generally more moist and tender than the center cut of pork loin. This time, I used a dry rub of Five Spice Powder. This spice mix can be easily found at your local Asian grocery store. However, I prefer to make my own as I can be sure of the quality of the individual spices.

I like simple salads. I do love to add color but I don’t necessarily want an edible rainbow either. This salad is simple, elegant, and has a pop of color coming from the pomegranate seeds. Here, the only dressing you need is olive oil and lemon juice. 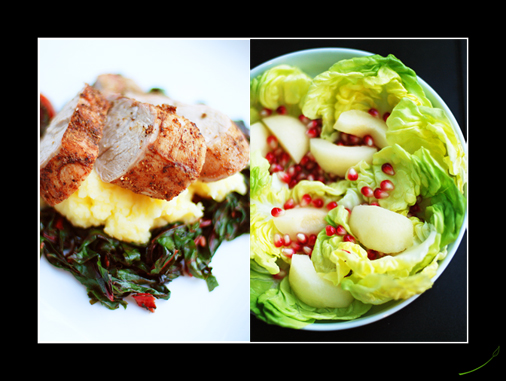 I like eating something soft and creamy with pork so these Yukon Gold mashed potatoes definitely fit the bill. I plated them on a bed of sauteéd swiss chard. Swiss chard isn’t as commonly used as spinach, but its taste is very similar to me. Like spinach, it’s also chock full of vitamins and nutrients. And in the world of vegetables, it’s quite the looker with it’s sexy, red stem and lush, green leaves. 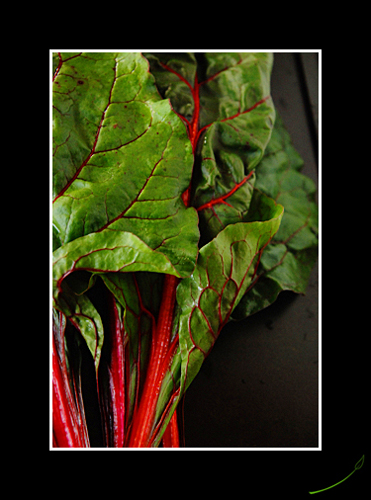 *To make your own Five Spice Powder, lightly toast until fragrant equal amounts of these whole spices:

Once they become fragrant, remove from heat and let cool. Once cooled, grind the spices using a spice grinder or mortar and pestle. Keep in an airtight container.

These savory french crêpes are a traditional breakfast in Pierre’s home in France. Whenever his mother, Suzanne, makes these for him, Pierre’s eyes light up like it’s Christmas Day. So, it’s no wonder that these crêpes are also the most-requested breakfast in our own home. I love the pretty green color, which is a result of blending spinach with the crêpe batter. The filling is simple, just grated gruyère. These are delicious on their own but are even better served with a sunny-side egg on top. 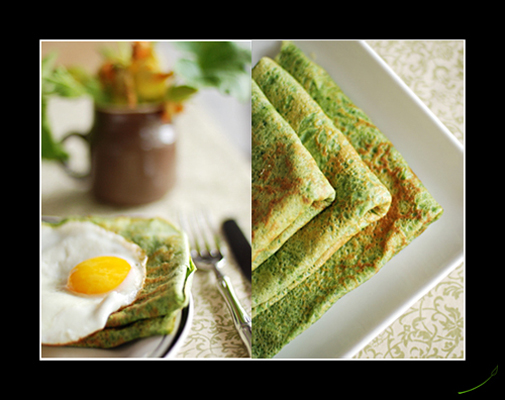 Pierre’s mother often uses frozen lettuce rather than spinach for the batter. In fact, she does this following a tip from her mother, who, like many in her generation, had suffered during WWII with German troops occupying her own home. The troops took what food and drink they wanted without any consideration for the home owners. Left without any food, she would gather any scraps she could find, such as potato and carrot peels and boil them down to make a soup. That soup and this frozen lettuce are examples of some of the resourceful and prudent measures this woman took to provide food for her family in those times.

Her method is easy: Keep a plastic bag or container in the freezer where you deposit any leftover lettuce – lettuce that has wilted past eating fresh but hasn’t gone bad. When you’ve got at least a cup’s worth, you can make these crêpes and relish in your impressive frugality! 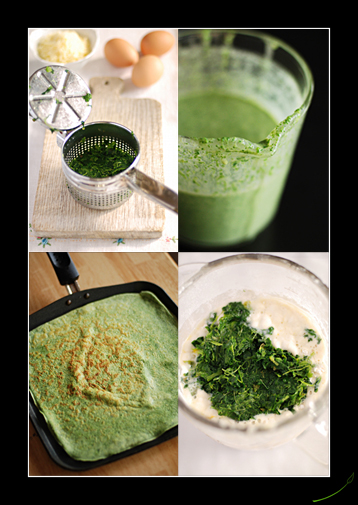 I already used up my frozen leftover lettuce so I made these with frozen spinach. I found that my potato ricer is also a great tool to press and squeeze out the liquid of the cooked spinach. I must confess, I purchased it right after watching Martha Stewart demonstrate it’s incredible powers to make mashed potatoes that are fluffy, airy and down-right ethereal. Unfortunately, shortly after purchasing it, I began my failed and meaningless attempt at eating “low carb.” So, this little tool sat in my drawer, neglected and unloved for some time. That is no longer, as I use it all the time now to make these crêpes as well as my beloved, high carb mashed potatoes.

*You can make the batter up to one day ahead and keep it overnight in the refrigerator until you’re ready to cook. 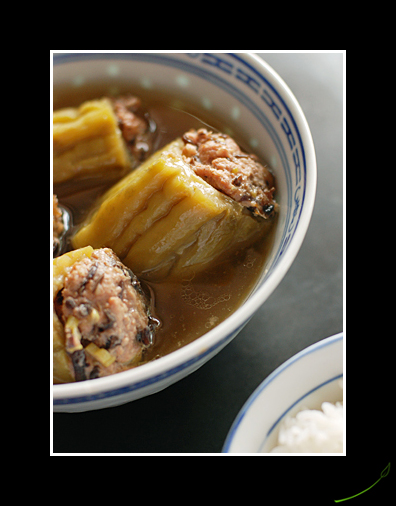 I’m through spewing angst on the floor and keyboard for now. With the intent to bring levity here, I’m sharing my mom’s recipe for Canh Khổ Qua – Bitter Melon Soup. As the name suggests, this soup has a very bitter, strong taste. Eating this was something my sisters and I scoffed at when we were younger but now, as adults, we can appreciate it’s interesting flavor as well as its purported health benefits. My mom insists that it is mát, something that cools or settles your stomach.

In my home, we tend not to make another meat dish to go along with this as there is plenty enough meat in the stuffing. We enjoy it with a steamy bowl of rice.

INGREDIENTS: (4 servings as part of a meal)

Trái Su Su (aka Chayote) is one of those vegetables that remind me what a small world this is. I grew up eating this and figured it was an Asian vegetable but later found that it is actually native to Latin America, where it is a predominant vegetable in many parts, particularly Mexico and Costa Rica. I remember my mom making this dish for the Latino men who worked for my Dad. They happily ate it and thought it was so curious that this little Asian lady knew how to cook their chayote.

Interestingly, it is called chou-chou on the French Island of Reúnion*, which makes me wonder if that has anything to do with why it’s called Su Su in Viet Nam, a former French colony. If you grow them, you know how adorable they look, like jade green pears that hang from a vine.

Su Su’s mild flavor makes it easy to combine with other savory ingredients like pork, chicken or shiitake mushrooms. In this stir-fry, its delicate and somewhat bland taste is a nice balance to the brininess of the dried shrimp. Once grated or cut, it’s incredibly quick to cook. I hope you enjoy it con mucho gusto. 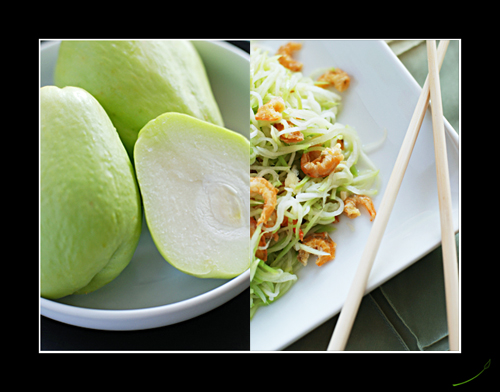 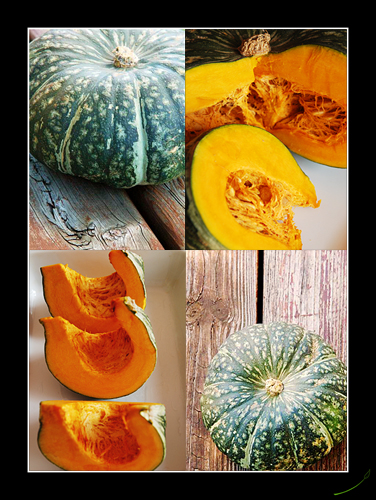 I think a lot of people like to press the Shuffle button on their MP3 player to mix things up and hear a variety of songs. Not me. If I like a song, I’ll put in on Replay for-ev-er. Sometimes, I’ll listen to the same dang song like, 100 times before I move on to another.

Am I obsessive? Compulsive? My answer to that fluctuates. What is constant is my attachment to a good thing once I find it. This is how I am now with Kabocha pumpkin. Kabocha muffins for breakfast. Kabocha soup for lunch. Kabocha-stuffed pasta for dinner. How ’bout Kabocha pumpkin pie, anyone?

It was the same with Butternut squash a while back. And there was that winter-long fling with Meyer lemons – which, late at night, I still think of. Oh, and let’s not forget my fixation with pomelos.

Nowadays, my fancy turns to Kabocha. Can you blame me? Kabocha, with its deep, emerald skin flushed against this intense, orange flesh is like Butternut’s sexier, curvier, non-surgically altered and intellectually superior cousin. And, it doesn’t need a ton of makeup to look good, either. I mean, who would you rather go home with???

That’s what I thought. So next time you’re at the market, look out for Kabocha. Cook responsibly. 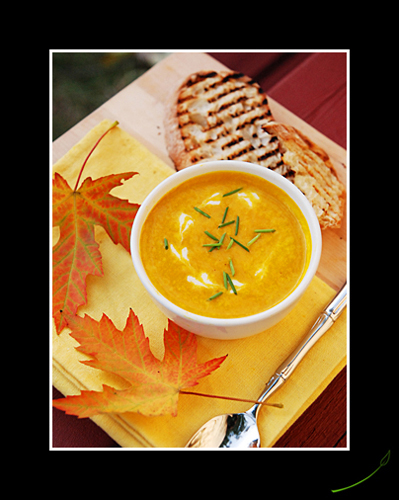 *If you use a regular blender, please use extreme caution as the hot liquid will explode everywhere if you try to blend too much at a time. Fill only up to 1/3 of the blender at a time. Bon appétit!