A few months ago, on my first trip to Viet Nam, I finally got to taste fresh jackfruit. Much like tasting real Brie de Meaux in France, this was a revelation. Unlike the syrupy and rubbery canned version I’d eaten before, fresh jackfruit was sweet without being cloying with a tender yet ever so slightly springy texture. In two weeks, I ate more than 5 kilos of this – and I’d do it again.

What I came to understand was that there are different types of jackfruit. The kind that is most common (Artocarpus heterophyllus) is very large fruit with firm, yellow flesh. We were treated to that as well as another, more expensive type called Mít Tố Nữ (Artocarpus integer) which was considerably smaller in size and had flesh that was more moist and soft than the common variety.

I remember my aunt squatting on the kitchen floor and carving into our Mít Tố Nữ as soon as she brought it home from the market. It’s perfume hit me with a deep, strong fragrance that was reminiscent of durian (sầu riêng) though not quite as pungeant. Below are photos by Pierre: a misty sunrise taken from my grandmother’s backyard, overlooking her coffee bean plants in Bảo Lộc, Lâm Ðồng; a jackfruit hanging behind her house and; my aunt, Mợ Thơm cutting our jackfruit – which, by the way, is a rather sticky, messy affair because of the natural latex that it exudes. 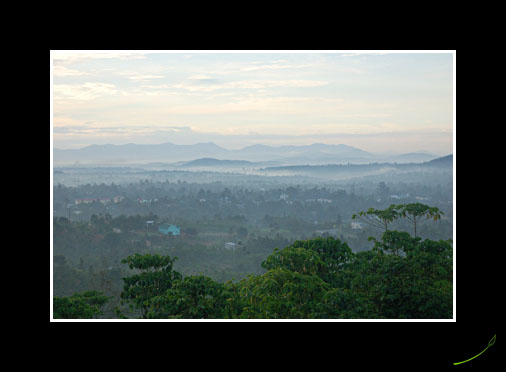 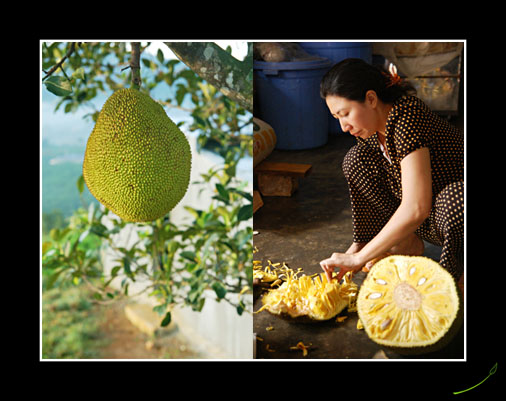 I’ve been wanting to make this dish ever since I earmarked a recipe from Charlie Trotter’s book. In it, he calls for stuffing pork tenderloin with various dried fruits – cranberries, raisins, apricots and currants. I know I recently posted a recipe for pork tenderloin. You may think it’s the only thing I know how to prepare. Who knows, you might be right.

Actually, my aunt in Viet Nam sent me some delicious dried jackfruit (Mít Sấy) that I thought would be nice to use in Charlie Trotter’s recipe in place of all the other dried fruits. After softening the jackfruit with boiling water, the only other ingredient added was shallot. I think dried mangoes would also be tasty. Or prunes soaked in Armagnac. Wait, isn’t it persimmon season? Yes, persimmons would definitely be good. 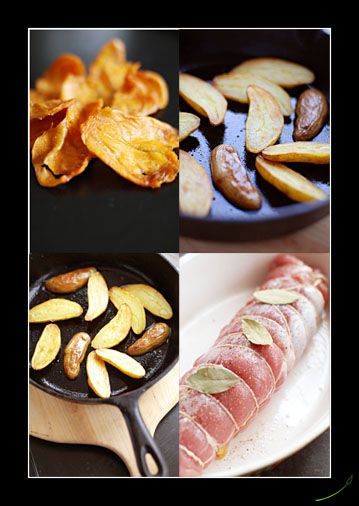 To balance the sweet stuffing, I sauteéd chinese mustard greens (Cải Cay), which have a slightly bitter, though delicious flavor. To add a Western touch, this dish was rounded out with pan-roasted, french fingerling potatoes.

I know a lot of folks like to hate on fusion cooking, so call this whatever you want. Here, the combination of sweet and bitter work well and the results really do make it worth the effort. Besides, when was the last time you tied meat into a nice bundle? Right.